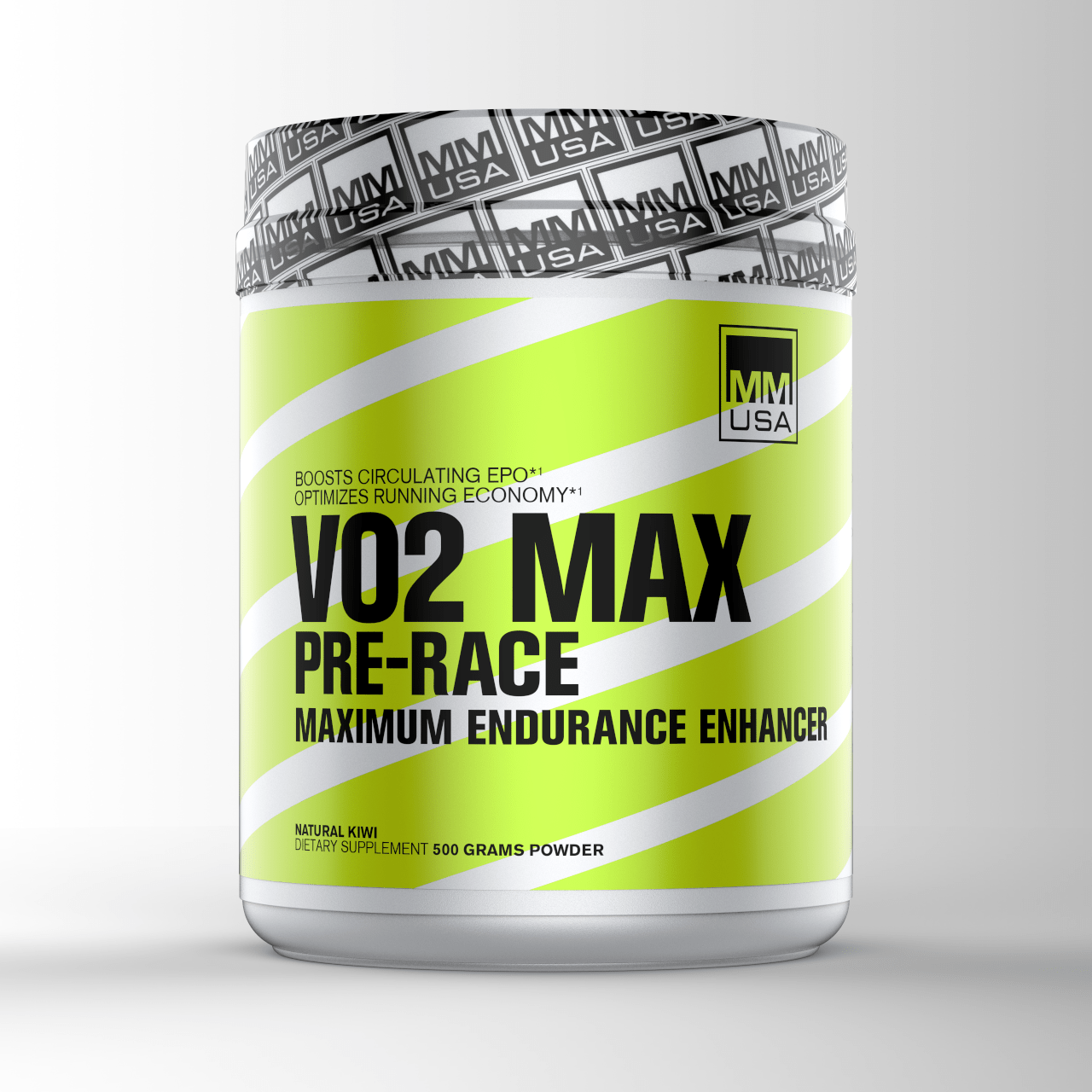 OUT OF STOCK ( Notify Me )
Get a full-intensity workout every time. Elevate your endurance levels no matter what sport you’re competing in or what training regime you’re following.

Endurance athletes who want to increase their VO2 uptake, improve their energy and stamina, get a quick recovery and improve their overall athletic performance.

Maximum endurance enhancer with Inositol, Vitamin B Complex, and Beta-Alanine.

The physiology couldn’t be simpler: the more oxygen you get to your muscles, the better they can perform and the longer you can work out to achieve higher fitness levels. VO2 MAX is all about delivering maximum oxygen for maximum muscle performance. Safely, legally, and supremely efficient.

VO2 MAX accelerates EPO and red blood cell production, which increases oxygen-carrying capacity. When cells deliver more oxygen, energy production can ramp up for higher intensity and longer duration, which means you can work out with less exercise fatigue.

VO2 MAX elevates endurance levels no matter what sport you’re competing in or what training regime you’re following. Excellence is literally in the blood. VO2 Max’s natural formulation lets you make the most of what’s already in you, in a 100% healthy way and with complete integrity.

Mix one serving (one scoop) with one cup of water thirty minutes before your workout. For maximum results, you may take one serving in the morning as well. 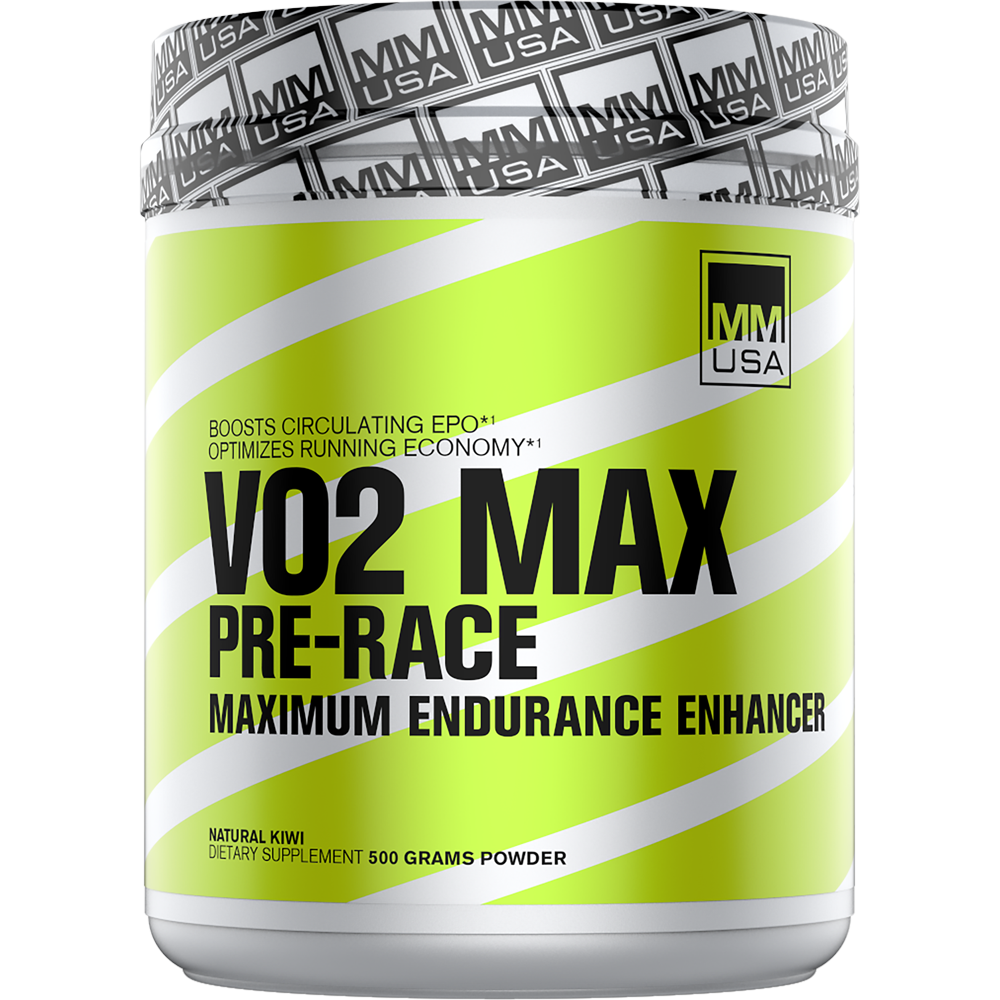 Vitamin c (as calcium ascorbate)
An essential micronutrient with many important biological functions and a cofactor for the biosynthesis of collagen, carnitine, neurotransmitters, and peptide hormones and has an anti-catabolic effect and accelerates muscle recovery.

Niacin (as niacinamide)
Niacin, or Vitamin B3, is one of the keys to getting a great workout. Niacin increases blood flow and dilates the blood vessels, getting more blood to your muscles as you’re lifting. It increases energy and greatly increases intensity.

Vitamin b6 (as pyridoxine hydrochloride)
Vitamin B6 is a key in the breakdown of certain proteins and allows the body to utilize energy to the fullest potential. It supports glycogen breakdown into glucose to produce the energy needed for training.

Folate (folic acid)
Folate is highly important for the conversion of creatine into phosphocreatine
for better energy production. It also delays fatigue and exercise-induced exhaustion, so you can stay longer on training.

Vitamin b12 (as cyanocobalamin)
Vitamin B12 contributes to the formation of the myelin sheath which enhances cognitive function by increasing the speed of transmission of an action potential in a neuron and the propagation of a nerve impulse via saltatory conduction. As a result, B12 enhances brain agility and sharpens reflexes while in action.

Iodine (as potassium iodide)
It is an essential nutrient for thyroid hormone production. Thyroid hormones play an important role in how our body creates and uses energy. It binds to receptors on each cell’s membrane surface and inside the cell at the mitochondria where energy is produced.

Beta-Alanine
Beta-Alanine increases intracellular buffering capacity during exercise, enabling athletes to perform a high-intensity exercise for longer periods of time. This is due to beta alanine’s primary role in lactate threshold, which in endurance training is defined as the rate at which there is equilibrium in lactic acid production and lactic acid elimination.

Cordyceps Extract
Cordyceps increases energy and endurance as well as reduces the onset of exercise-related fatigue. It boosts the ATP production to provide sustained energy needed during training.

Phenylethylamine HCI (PEA)
It functions as a neurotransmitter that gives you heightened focus, attention, goal-directed behavior, and task completion.

4.8
Based on 6 reviews
Powered by Customer Reviews plugin